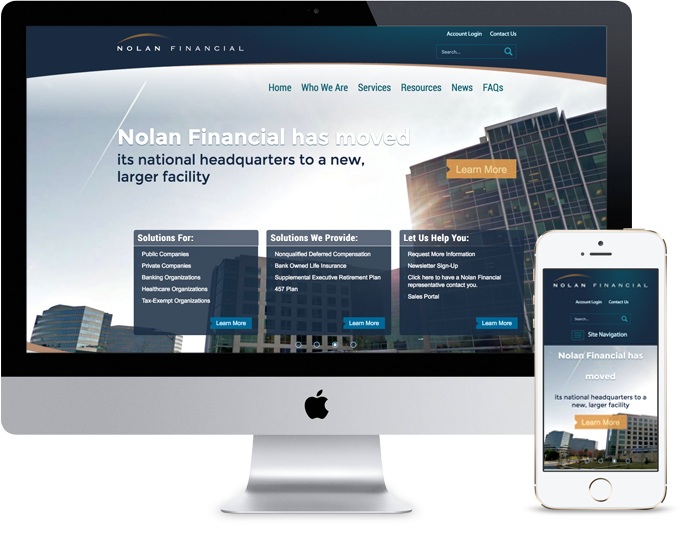 Founded in 1989, Nolan Financial is a a fully-integrated, executive benefits and compensation consulting firm with a focus on the custom design, implementation, funding and administration of non-qualified plans with a dedicated team of experienced professionals works closely with its clients from plan design to implementation and beyond.

Headquartered in the Washington, D.C. area, in early 2012, Nolan Financial opened a new administrative center in Dallas, Texas in response to the firm’s growing national client base.

Here’s how we partnered with Nolan Financial and our offerings:

Our relationship with Nolan began in mid 2012;  Nolan was searching for a design/development firm that would be able to meet it’s specific requirements to redesign its existing web presence.  They were looking for a company that would be able to form a close bond that could be tapped into on a need to need bases post launch given their growing company would require further attention in the coming years.

After a detailed round of RFP process, HindSite was select among a handful of other companies bidding for the project.   Since the beginning of our relationship, HindSite Interactive has been actively providing a series of web and graphic consulting services that have so far included: 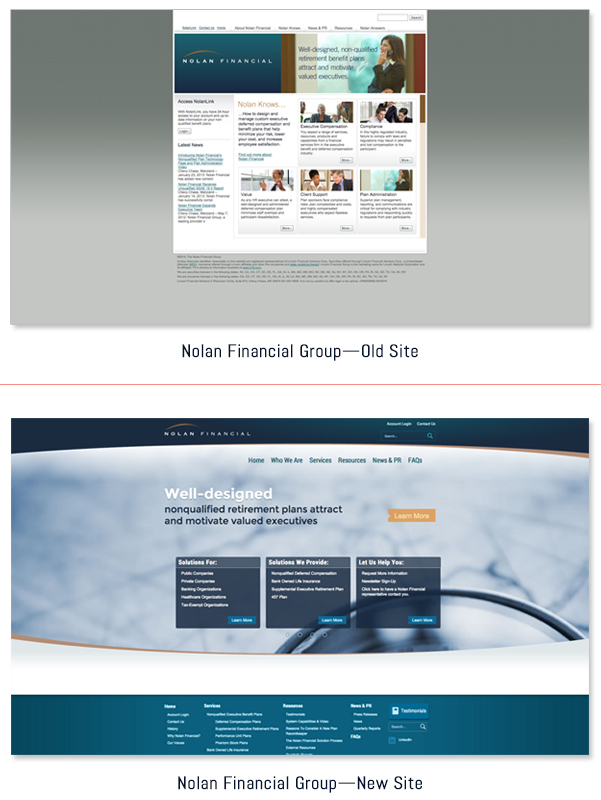 Nolan Financial needed a web partner.  Although it has an in-house IT team, the firm needed to outsource its website needs to a company that specialized in design and usability and could visualize Nolan’s vision into a new web presence that not only reflected it’s new branding, but could do so in a manner that would not sacrifice user experience while be built on a platform that could allow for future scalability.

There were a few challenges to overcome:
– There was a large degree of content across various pages of the site, which in the existing site were too hard to navigate through.
– Nolan needed to approach it’s services from two angles:  by company type and by the type of solution.
– The firm needed a presence that would allow for optimum user experience on all popular devices including web, mobile and tablets.
– Traditionally most financial institutions have a boring website;  Nolan wanted to pass this boundary while staying true to its roots.

As with any project, we first listen to our clients, which was also the case with Nolan Financial.  This kicked off  the discovery phase.  We wanted to know who the target audience was, what the firm’s short and long-term missions were and what were the primary goals of the web presence relative to the firms business goals.

Once we had a deeper understanding of the goals and objectives, we utilized our phased approach to solve each of the challenges of this project.

As a result each project begins with consultation and a discovery phase to determine the project objectives and brainstorm ideas and potential concepts.

We developed a wire-frame and site architecture as the road map to the web experience.  After a few rounds of tweaks and approval from the client, our next phase included the creative process where the creative director worked directly with Nolan’s team to design and finalize the website layouts.

Design ideas undergo proof of concept and revisions necessary to reach approval from both parties before going to development and production phase, followed by a full acceptance testing and review phase to reach approval.

Although HindSite develops on a number of CMS (Drupal, Magento, WordPress, and custom CMS), we always determine the appropriate CMS based on the needs of our clients and the project at hand.   WordPress was selected as the CMS of choice and HindSite’s development team integrated the functionality to the front-end templates.

Rather than creating the Nolan website on a bootstrap theme (where it is automatically responsive: mobile friendly), we went the longer, more time-consuming route of creating a fully customized template from the ground-up. After the desktop version was created responsive design principles were applied to the layouts as a secondary phase.    This is because the layout was heavily customized and a bootstrap format was too limiting for the needs of the client.

We utilized standard web technologies and open source frame works to develop the Nolan website.  These included:
HTML/CSS and Java script for front-end and WordPress for the CMS (Content Management System) 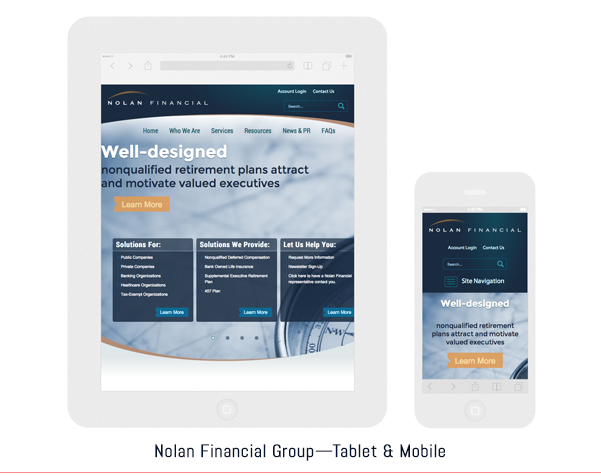 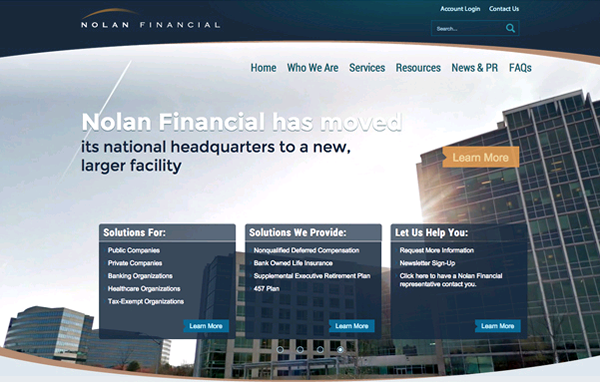 The new website is serving as one of Nolan Financial’s primary marketing tools which ties in the various print and digital collateral as part of an overall branding package. Nolan Financial continues to rely on its web presence to further improve it’s marketing reach and with an easy to use content management system has ability to fully maintain their web presence.

“Hindsite Interactive did an incredible job with our website and we couldn’t be happier with the results and the level of customer support we received. They made the process very easy and were always available to answer questions or provide excellent feedback. I would highly recommend Hindsite!”